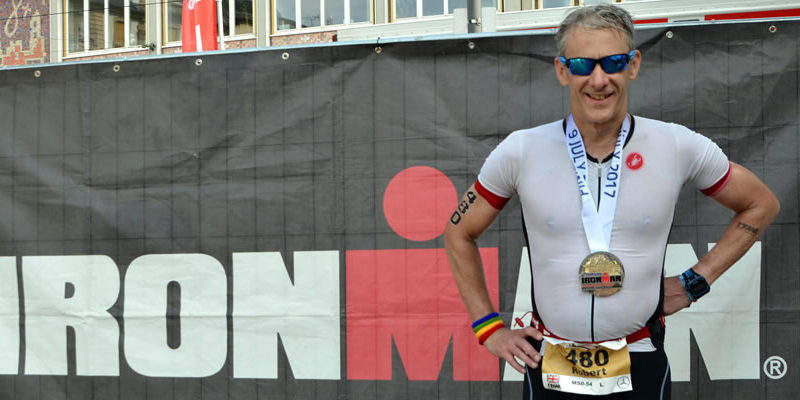 The prospect of sitting in a paddling pool shouldn’t really be the greatest excitement imaginable, especially for an adult! But on July 9th 2017 I could not have enjoyed anything more. I had just completed the Ironman Triathlon European Championships in Frankfurt.

It had been a very long day – I had got up at 3am, had swum for 2.4 miles, cycled for 112 miles, and run a marathon! All of this in around 10 and a half hours. And it was unbelievably hot – reaching 30 degrees in the afternoon.

As the race ended and I reached the finish line, the relief was indescribable. Photos were taken and I was asked by someone looking very carefully at me, “Congratulations, are you ok? Do you feel alright?” This is a standard protocol and once I had said yes I feel ok, she showed me through to the athlete garden. She was telling me where everything was: massage, food, medical tent, showers, my bag with my clothes, but the only thing that I could focus on was two large paddling pools! They are in front of me filled with exhausted triathletes. I found a space to sit down in and they laugh as I lower myself down into the cool water with a mixture of stiffness and pleasure. The strain on my face is clearly very amusing. I then laugh in the same way as the next person goes through the same process.

Because of my performance in Ironman races last year, I was awarded “Silver All World Athlete (AWA)” status which gave me preferential registration and some other perks, one of which was an invitation to a special breakfast event for Gold and Silver AWAs before the start and meeting Paula Newby-Fraser, 8 time Ironman World Champion and a legend in the world of triathlon. I went to speak to her and she wished me a fun day of training, making it seem like just another day rather than a race with 3000 other athletes! This really struck home to me and I decided that I would take her advice and pretend I was just training. It was a good tip.

I want to compete again next year, as I feel that every year I get a bit more experienced. The level of detailed planning that is necessary for one day of Ironman is enhanced every time I compete. In 2017, the organisation of my kit worked well and at each stage, as I transitioned from lake to bike and then bike to marathon, everything I needed was in the right place. As an orthodontist, a profession which requires a high level of planning and co-ordination, this is good practice!

At the very end of July 7th, as I walked back to my hotel, I saw the winner of the 2017 Ironman, Sebastian Kienle being interviewed on German television. His time was 7:41:42. I guess I have a bit more training to do!