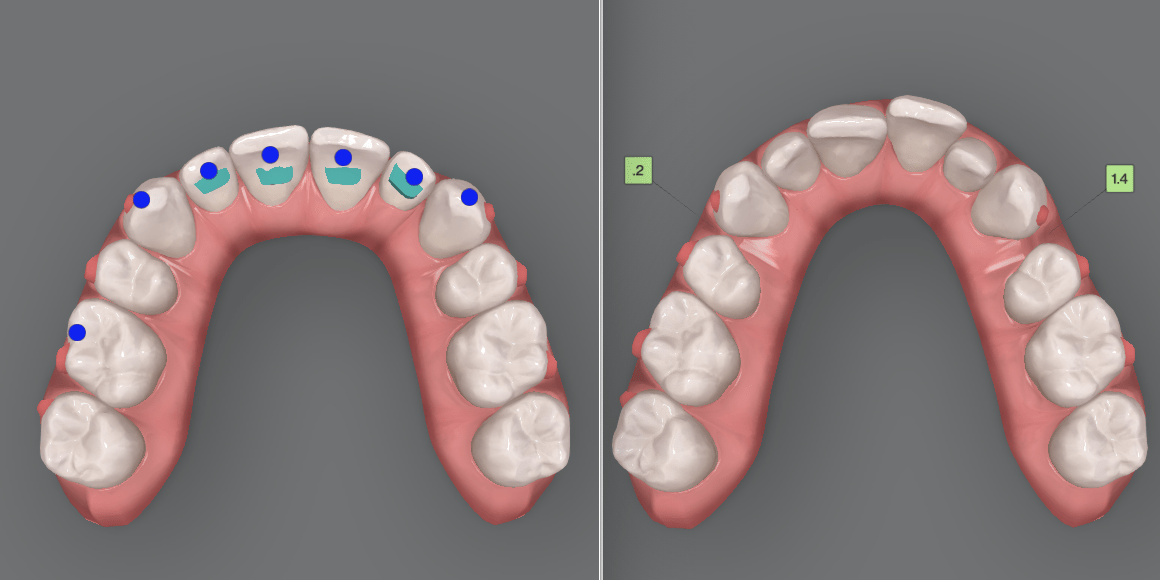 When I was at school I had some orthodontic treatment which meant having two removable braces.  Having had four teeth extracted, the first brace was to pull my upper canines back.  The second one was to pull my four front teeth back.  It kind of worked but really didn’t do what modern braces can do today.

I have noticed over the last 20 years, one of my upper lateral incisors gradually moving back.  The result, one of my front teeth, a central incisor has started to rotate outwards.  As an orthodontist in Birmingham it had always been at the back of my mind but I never really felt the need to have a brace.  My other problem would be who would do the treatment for me?

In the last 18 months, like many of us, I have spent many hours on Zoom meetings.  This gave me the opportunity to look at my face on a regular basis.  It was odd at first but as I got used to it, I noticed a few things.  I could probably smile more but when I did, the appearance of my teeth was something that I became more self-conscious of.  This has happened to a lot of people though. I found it interesting that the same thing was happening to me.  Carol did a scan for me and I collected records and looked at my teeth in a new way.

My records went off to Invisalign as I thought it would be a good experiment to see how far I could take the appliance with a bite like mine, which is something of a challenge.

I have a deep overbite which means the vertical overlap between my upper and lower teeth is increased and would make fixed braces more challenging.  The thing was, I just couldn’t be sure how much I would be able to tolerate bite opening.  The Invisalign process means that we get a 3d file, called a ClinCheck, showing how the teeth will move at each stage.  We can also place attachments onto the teeth to make the efficiency of the appliance better.

It was decided that I would need bite ramps on the inside of my upper front teeth, to help open up my bite.  I would also need attachments and some adaptations to the upper aligners to allow me to wear elastics, to deal with the skeletal discrepancy.  The elastics should help to allow my upper front teeth to be pulled back, while nudging my lower teeth forwards.

I pressed go, once I had completed the planning and reviewed the set up.  It was then a case of waiting for the aligners to arrive.

Some boxes arrived and I received 40 upper and 40 lower aligners and some templates to allow me to have my attachments fitted to my teeth.  The attachments took about 15 minutes to put on and were bonded with blue light curing to make the composite set hard.  The attachments felt rougher than I expected but nothing that concerned me.  I also found that I was unable to bite together because when trying to put my teeth into the normal position, one of the bite ramps was in the way.  It made me wonder if this might mean that I would bite them off and if it might affect my speech.

I decided not to tell anyone that I had started treatment and duly put in my first set of aligners.  It was decided that I would try replacing the aligners each week, just to see if this would be possible without creating too much discomfort.

At first the aligners felt very thick, even though they are clearly very thin, when you look at them.  The first day for me was the worst, it became achy and while not painful, it was just uncomfortable and I couldn’t really think about much else.  I got on and did other things but the feel of the aligners was always there.  The following morning I expected more discomfort but did not feel anything like that.  During the second day, I started to bite on the aligners.  This makes the aligners seat a little more onto the teeth and feels tighter.  I think I will be able to do this on my own, but if necessary, I will get some “Chewies” to see if they help in ensuring the aligners create the most optimal pressure on my teeth.

I have gone back to look at the “ClinCheck” which has enabled me to analyse the movements which will be happening.  Mostly the first 15 weeks will be about expanding my upper arch in all directions, using elastics and then the treatment will become about closing the lower space and then bringing the uprighted upper front teeth back in.

I am now on aligner 3 and will wait a week to change it.  IMy tendency to snack on things has gone.  It is just too much bother to take my aligners out and have a snack.  I am also finding that I am brushing my teeth more often and using floss more as well, just to ensure that I don’t have anything stuck between my teeth for long periods of time.  Maybe I will lose a little weight.

There has not been any problem with biting on the bite ramps or with not being able to bite together.  I have just adapted and found a different way to eat.  The main thing that I was worried about was how my speech may be affected and did feel the need to practice tongue position.  I also noticed that I had a distinct lisp.  What really surprised me was that when I asked my son, he said “No, I honestly cannot hear any difference in your speech”.  No’-one in my family has and even with a lot of checking, everyone has confirmed it is all just in my own head and ears.

Overall it has been a good start with lots of new things to get used to and has helped me to understand a lot of what our patients go through.  I feel that I have got used to them now and they are less intrusive than they felt on day 1.  I will update this diary as my treatment progresses.