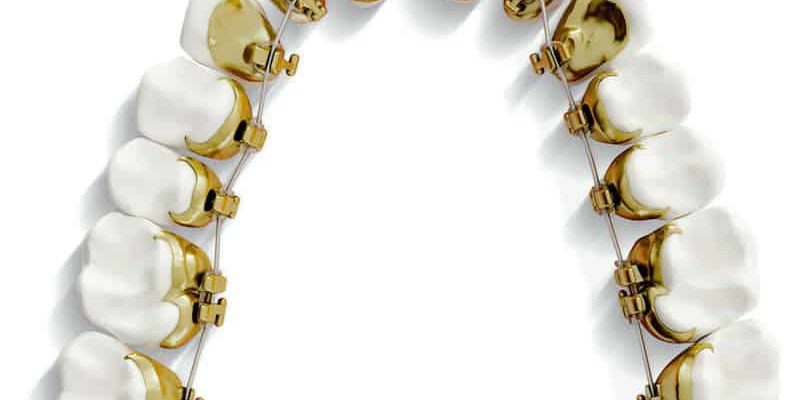 In 1979 Kinja Fujita in Japan had developed an idea for putting fixed braces on the tongue side of the teeth.  He had a lot of patients who did martial arts.  He wanted to develop a system that reduced trauma to the mouth against fixed brace components.

The idea had developed into an appliance only sold in Japan.  At the same time a Beverley Hills Orthodontist, Craven Kurz was visited by a Playboy Bunny Girl who did not want a fixed brace showing on her teeth.  He advised her that it might be possible to put one behind her teeth but she never started treatment.  His first patient with lingual braces was a Real Estate Agent but that is not as interesting somehow is it.  So most people seem to know the story of the Playboy Bunny Girl.

From this point on, orthodontists were trying to use lingual braces. A working group was put together called the Lingual Task Force.  This was headed by Jack Gorman, Craven Kurz and Bob Smith.  During the early 1980s ceramic tooth coloured brackets were developed and it was quickly found that lingual treatments were very difficult and did not get such good results in many people’s hands.

More orthodontists then started using ceramic brackets. While lingual braces took off in places like Japan and Korea, the rest of the world seemed to stop using them.  During the 1990s the Lingual Taskforce developed multiple generations of a lingual bracket. Eventually the 7th Generation bracket was settled upon.  A few years later an indirect bonding technique called the CLASS system was developed.  This for me was the game changer.

How we started Lingual Orthodontics

It led me to a journey that shaped my career.

The CLASS system had only become more widely used a few years earlier.  I happened to be in the University Book Store and came across a book about Lingual Orthodontics by Rafi Romano.  It was on the bargain pile and reduced to half price.  In it there was a break down of all the different laboratory procedures and techniques.  I started to realise that this was still a subspecialty that was in its infancy.  I felt like I was discovering a secret and that there were a small number of people who could actually do lingual orthodontic treatments to a high level.

A year later Rafi came to the UK and did a course in Harrogate, so I booked onto it, bought the necessary kit and started trying lingual techniques out in my practice.  By this stage I had talked to a few patients who were happy for me to try this out.

It was clear that the 7th generation Ormco bracket was very bulky but I was surprised by how well it could work.  It was a very difficult technique though.  In 2002 I went to the European Lingual Congress, known as ESLO which was held in Berlin.  Two new lingual appliances were being marketed by the Orthodontists involved.  The Incognito system by Dirk Weichman and the STb system by Giuseppe Scuzzo and Kyoto Takemoto.  I used both and by this stage Didier Fillion, a French Orthodontist working in both Paris and London asked if a few of us would like to form a British Lingual Orthodontic Society.  So in 2003 we had our first meetings in London.

Being a member of BLOS and helping on the committee meant that I would meet all of these people who had developed lingual orthodontics.  I helped as the Website lead and went to every lingual conference I could get to, including the first World Society of Lingual Orthodontics meeting in New York in 2003.  It was clear at that stage that digital technology would be a big part of the advancement of Lingual Orthodontics.

5 years on and I had developed a Lingual Orthodontics Course at Warwick University with Ian Hutchinson.  I made the suggestion that we make Didier Fillion our President because of his wealth of connections with societies around the world.  I had not banked on the committee making a suggestion.  Because the Chair role was now vacant, I should fill this role.  Within days of being made Chairman of BLOS, Didier messaged me to say that the European Society of Lingual Orthodontics would like to run a Congress in England.

We put together a bid for the conference.  Our bid was accepted and as a result I chaired the organising committee, alongside Germain Becker, President of ESLO.  This journey took me to Cannes and Buenos Aires to help promote and organise the event.  Again I was amazed at how lingual orthodontics had developed and how many talented people were doing this work.  We held the Congress in London and even had a Reception at the Houses of Parliament.

In 2012 I was given a Life Membership of BLOS, which was extremely generous of the Society and I felt it was time for new blood to take over.  Since then BLOS has continued its work and I was heartened to be involved on the last meeting organised by Sunil Hirani where Guillaume Lecocq presented.

During this journey, as well as everyone else that I have mentioned, I met friends like Asif Chatoo, Paul Ward, Baz Parmar and Megan Hatfield, all successful lingual orthodontists.  I feel that we have all become part of the history of Lingual Orthodontics.  I still do a fair amount of lingual treatments but like to use it where it works best.  It is great to be able to scan our patients and know that the information will be with the technicians that day.  The information is so detailed that I can be reassured of the accuracy of the appliance.  It has made my work far easier.  Lingual braces are now just something that many orthodontists offer.  For me it has been and still is a wonderful and exciting journey.