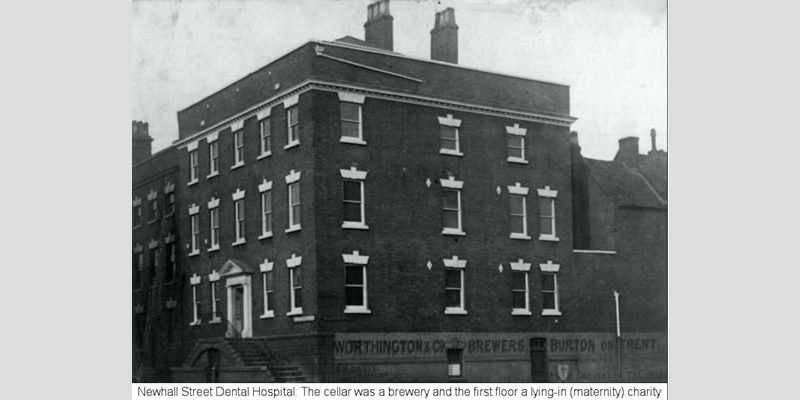 Last week, whilst browsing on the BDA website, I noticed the entry citing Birmingham University as the first in the UK to award a dental degree back in 1901.  I was already aware of this but as someone who has lived and worked in Birmingham for longer than I can remember, it got me thinking about what other historical dental facts might be lurking in our fine city.

According to a local history website, the first dentist recorded practicing dentistry in Birmingham can be traced back to one Robert Law who resided in White Hart, Digbeth in 1741. Dentistry in those days can seem rather primitive by today’s standards but it appears that Mr Law was something of a restorative ‘specialist’. He was described as making “artificial teeth to the greatest perfection, so artfully fixed as to endure for years without taking out.”  The Dental Hospital did not open in Birmingham until 1858, over 100 years later, but was still known as the first Dental Hospital in the country.   The Dental Students Society was started in 1886 and I remember being at the 100 year Centenary Events organised in 1986 when I was in my first year at University.

As with all big cities, 19th century Birmingham has some grim history and one such story comes in the form of the peculiar case of Jeremiah Darcey. Birmingham resident, Jeremiah was reported to have died after swallowing his own false teeth (!) This sorry tale was published in ‘A Grim Almanac of Birmingham’ by Midland author, Karen Evans.

Luckily, it hasn’t all be grisly history and sorry tales. There have been lots of firsts for dentistry in Birmingham and most of these have taken place at Birmingham University. The dental school here was recently ranked first in the country for excellent dental research and the team there have been part of some interesting projects. One research project into the science behind ultrasonic scalers (which are a handy piece of technology used by dental professionals) revealed a formation of tiny bubbles. The tiny bubbles have been found to be key in the cleaning process of built up plaque which will help in the design of Ultra Sonic Cleaning tips in the future.

The University is also home to a ‘longstanding research programme of pulp biology and regenerative endodontics.’ Regenerating teeth is a concept often written about in the dental press and often mused on as a game changing treatment for the near future. It is also something I wrote about very briefly in my last blog.

Another exciting development that has sprung up just around the corner from our practice is Birmingham’s new dental hospital. The hospital was updated in 2015 and located on the old site of the BBC’s Pebble Mill Broadcasting Centre. It is the first integrated, stand-alone dental hospital built in the UK for almost four decades.

Living and working in Birmingham has lots of benefits and as an orthodontist it is certainly a bonus to know that our city also has some interesting contributions to dentistry both historically and in the present day.